Stranger Things is a new Netflix original series directed by the Duffer brothers, both 32. It is an inspired and nostalgic mega-movie highlighting everything from their childhood. This new mega-movie genre of TV (think True Detective) takes cinematic qualities of movies and sprawls them across 8-10 episodes, essentially creating an 8 hour long mega movie. The Duffer brothers decided to make a TV show that they would watch, because what they wanted to watch wasn’t out there. They draw almost all of their inspiration from their horror-saturated childhoods, creating a hodgepodge of true to the genre.

This show is dripping with flavors from a range of directors and films. Every scene is tastefully crafted with serious influence, instead of cheeky nods, creating undercurrents of homage that sneak up on you. The directors’ desire was to create something scary, and accessible, and while paying tribute to their youthful selves in this 80’s period piece. Every episode feels like a chapter of a Stephen King novel drawing us back, not with cliffhangers, but rather with good storytelling and relatable characters. The Duffer’s have paid a terrific honor to the greats of our time, specifically directors Steven Spielberg and John Carpenter, and to movies like Stand By Me and Nightmare on Elm Street. In fact, the largest portion of the Duffer’s proposal to Netflix for their show was a trailer composed of shots from E.T., Close Encounters of the Third Kind, Nightmare on Elm Street, Stand By Me, and The Thing all scored by a John Carpenter soundtrack. Our guides through the series are four young boys who play Dungeons and Dragons, hate girls, and want to chase monsters. These kids are what make this show so great; they completely embody the untracked and adventurous youth of the 80’s. The directors tell a real story about headstrong, campaigning boys who willing to put themselves at risk to defend their friends. However, Winona Ryder and Charlie Heaton (a mother and her oldest son) bring this show down with their performances. They deliver cliche and boring characters. One surprising element of this show is how they handle romance. If you have ever seen a horror film, you know how stereotypically awful romance can be, however Stranger Things gives us a fresh take on relationships. 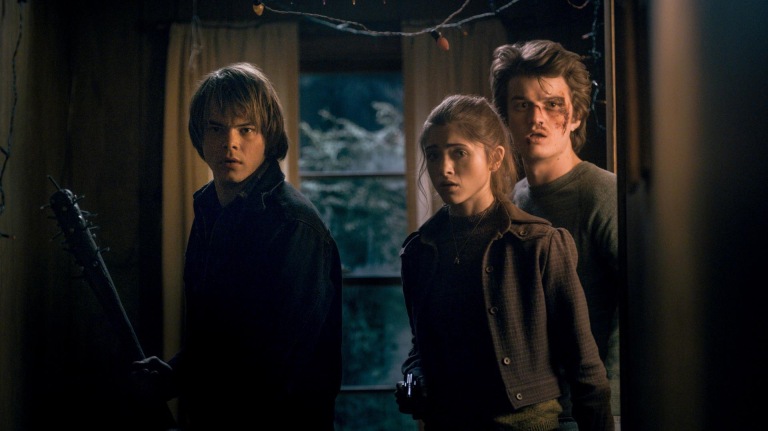 A small budget affected this production as well, especially in the CGI department. The CGI is noticeably weak and towards the climax it’s even more apparent. Aside from some cliche performances and SyFy CGI this show accomplishes its goal. It paints a vibrant picture of the 80’s with an original, retro soundtrack and a great costume department. Even if you are not a fan of 80’s films you’ll find yourself enthralled with this story and its young heroes. While paying homage with it’s own originality With an original influenced story, Stranger Things brings something new to the table. A myriad of elements spun by the great storytellers of our time help to draw us in and a band of young boys make us long for youthful more adventure.