Each year it seems we are blessed(?) with a new shark thriller movie. The past two years Hollywood delivered  The Shallows (2016) and 47 Meters (2017), both of which took a serious and scary tone. The Meg, 2018’s offering,  will undoubtedly be lost in the  menagerie of shark themed films in contemporary cinema.

From its conception The Meg was set to be directed by Eli Roth with a hard R rating and $150 million dollar budget. Roth left the project due to creative differences: the studio wanted to go with a PG-13 rating for wider viewership. Anytime a studio opens itself to multiple directors, the vision of a film suffers. The Meg is no exception. It suffers from a lack of consistent tone, at times it begs you to connect emotionally with its characters and at other times it tells you to forego any attachment and enjoy the bloody ride. As a result, The Meg has poor characterization and not enough fun. 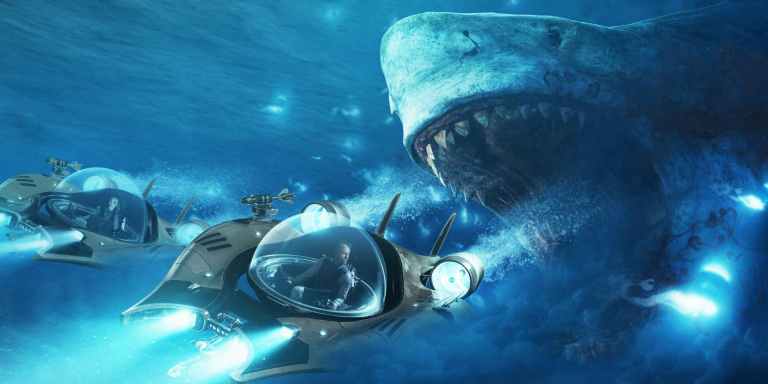 With a budget of $150 million, you would think this movie could escape the Syfy channel aesthetic, but it did not. Every scene felt generic, aside from the opening sequence. Most underwater shots felt bland, a huge disappointment since half the movie is spent underwater! The Megaladon itself, looked cheap and didn’t visually reflect the budget. Had they been able to create a better megalodon design this movie would have been much more successful in the long run.

What starts as a genuinely intriguing plot quickly turns to a mess of both editing and screenwriting.  Jason Statham’s character is the only success when it comes to characterization. His motivation is written well and he is given a couple of moments to shine as an action actor. Aside from Statham, The Meg literally begs its viewers to care about romance and family ties; but due to a divided tone, emotional moments become cheesy and ridiculous moments leave you scoffing instead of taking your breath away.

The Meg could have excelled with a more reserved nature to its monster alike to Godzilla (2014). This method builds suspense and allows our imagination to build a fearful idea of what the Meg could actually be. It held such a a flippant nature to showing off its beast that its shine quickly wore off. The Meg does base itself on a more scientific approach instead of a lore or mythology base. This can work well, but only if the scientist team is compelling and strong. The Meg, however, sports a weak suite of scientists and a lackluster scientific marvel.

Even through all of its struggles, The Meg was able to polish a couple a great sequences into fun moments. While most of the Meg sequences relied on CGI, basically the rest of the movie relied on clean set designs and some decent stunt scenes. This movie shines bright for a small part of its runtime but otherwise it add to the dull drum of big budget summer movies.