Initial promotions painted Venom a dark departure from our usual superhero flicks. What actually arrived on the big screen was a surprise comedy. Poorly paced story and chaotic action sequences aside, what I expected to be a grim, adult anti-hero story was actually a hilarious buddy comedy, though it would have been nice if cast members besides Tom Hardy knew that going in. 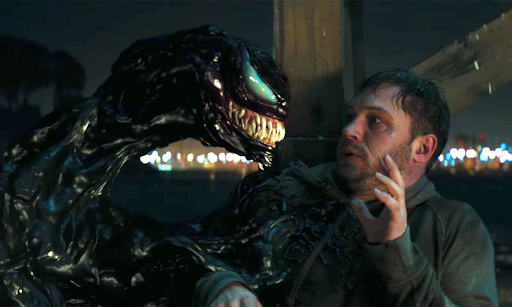 Venom stars Tom Hardy as Eddie Brock, an investigative reporter whose life undergoes a serious shift when he is exposed to the symbiote Venom. In the symbiote’s last big screen outing (Spider-Man 3, 2007), Venom was an alien parasite that brought out the worst in its host. To contrast, in Venom, it takes on a personality of its own, “speaking” to Brock and making decisions. This is one of the triumphs of the film. Rather than a normal superhero movie, this film takes a page out of the buddy comedy playbook, making for some hilarious moments. The movie is at the most compelling in scenes in which Brock and Venom are interacting with one another.

Whether or not those moments were intended to come off as comedic is another story entirely. In fact, at some moments it feels as if Hardy is in an entirely separate movie from his fellow cast members. They are playing a darker superhero movie, while Brock is using both his body movements and facial expressions to deliver a great performance as a man hosting an unexpected guest. This isn’t necessarily a fault of the movie, as I think each tone finds a home in the story, and it rarely feels jarring.

While Venom succeeded in creating unique and compelling rapport between Brock and the Symbiote, it faltered during some of the more dramatic moments. Namely, action sequences were chaotic and difficult to follow aside from one. While this feeling sort of works with Venom’s penchant for wanton violence, it made sequences confusing and obscured some of the moments of synergy between the two. Additionally, the pacing of the movie left a lot to be desired. The first act of the film dawdled along, leaving next to zero time for a compelling finale; by the time we’ve reached the climax of the film, it’s basically over.

The supporting cast performs admirably in Venom. Particularly, Riz Ahmed as Carlton Drake, the charismatic villain of the film. Ahmed’s performance was enthralling, and he dripped confidence and charisma in every piece of dialogue. Unfortunately, his character was not given sufficient motivations to back all of that up, and he ended up a flat antagonist whose only purpose is to be defeated by the protagonist.

Venom is a film that didn’t quite deliver what audience members were expecting. Those who go to see it expecting a grim, more violent superhero movie will probably be disappointed. However, if you view Venom with no expectations, you’ll be pleasantly surprised by how funny this movie is. Though it’s far from perfect, Venom delivers an enjoyable experience that defies expectations.